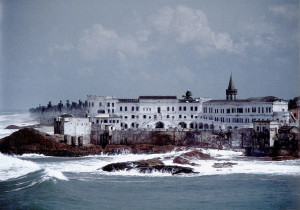 After many centuries of disinterest it was only towards the end of the 13th and the start of the 14th century that European ships started travelling the mysterious routes beyond the Pillars of Hercules towards the south.

The reasons for these voyages were varied and included commercial exigencies such as the need to circumvent the strong Mameluke Empire of Egypt (at that time an obstacle to trading) and the desire to find a direct route to the extraordinary gold sources of tropical Africa. There were also religious aspirations of establishing contact with the mythical Kingdom of Prester John and Christian Ethiopia with which Europe had maintained only sporadic relations during the Middle Ages.

Those first forays were mainly by the Genoese and Catalans, however, they were destined to cease within a few decades due to the population and economic crisis in Europe in the middle of the 14th century.

It was the start of the 15th century before great voyages towards Africa were once again undertaken. Portugal, which at that time was a small, poor and under-populated country, was the promoter of the initiative.

The Portuguese, who themselves were only liberated from Arabian domination little more than 150 years before, took advantage of their privileged geographical position and of their experience in Atlantic navigation. A technical problem which up to then had impeded navigation along the African coast was in fact resolved during those years: a route was perfected which, by taking a wide arc near the Azores, allowed the caravels to return to Europe using the trade winds from the south-west.

The new ships which replaced the Mediterranean type galleys with sails and oars, the discovery of a system to overcome the obstacle of the constant southerly winds and, probably most important of all, the conquering of a certain psychological reluctance of navigating towards unknown seas were the factors which prepared the Lusitanians to play the main role in the new adventures.

Nevertheless, it would be the willingness and the initiatives of a prince, the infant Henry of Portugal, that would transform these potentialities into concrete facts: the fundamental stages were comprised between the travel by Gil Eanes, who in 1434 rounded Cape Bojador between Morocco and Mauritania, and the travel by Vasco de Gama who in 1498 surpassed the Cape of Good Hope. The latter after having reached the coast of Mozambique, went on to land in Calcutta, thus discovering a new route towards India. Therefore, in little more than 60 years the African coasts were no longer an enigma for Europe.

Descending along the coast of western Africa between present day Senegal and Nigeria the Portuguese discovered in succession a series of small tribal entities. These did not always consist of a single village but of several villages under the rule of a more important one. The first Europeans therefore found themselves faced with an area of extreme political fragmentation where a state of continual belligerence existed between one community and another. In this coastal region the great empires and confederations of the interior did not extend as far as the sea.

This situation, together with the fact that the new arrivals did not aspire, at least for the time being, to territorial conquests made it possible to establish relations with the natives. This was the beginning of a period destined to last more than three centuries in which first the Portuguese, then the Dutch, the French, the English, the Brandenburgs, the Danes etc settled along the coast, in particular the Gold Coast, present day Ghana, and built forts and emporia in order to promote commerce, the search for gold and, at a later stage, the slave trade.

The situation did not change even when the Portuguese made contact with the great political entities of Western Africa : the Benin Kingdom and in particular the large Kingdom of the Congo. Compared  to the small tribal entities of the Guinea Coast these were highly complex social and administrative organizations which practised a true control of the territories and trade with a strict and well structured hierarchical system lead by a monarch.

Instead the Portuguese encountered a quite different situation in Eastern Africa: having rounded the Cape of Good Hope, Vasco de Gama and his crew discovered a series of extraordinary cities of which up to then the Europeans did not even suspect the existence. Each time they were amazed at the abundance of riches, the opulence of the palaces and the refinement of the inhabitants. In reality those cities had already been flourishing 200 years earlier than the arrival of the Portuguese and had been for centuries a port of call and landing place for Arab, Persian, Indian and Chinese merchants. It was a world deeply imprinted with an Islamic culture, whose prosperity was based not on production but on exchange.

And finally continuing northwards contact was made with Ethiopia, the mythical Christian Kingdom of Prester John, the subject of legends in the Middle Ages.

The characteristics which associate the first travels in the 15th century and subsequently those up until the end of the 18th century is an essentially coastal knowledge of Africa. The interior, apart from sporadic and limited penetrations, was a mystery and remained as such for quite a long time afterwards.

The aim of this exhibition of images and texts, taken mainly from old Italian publications, is to recall those extraordinary human and cultural adventures in a sort of hypothetical travel along the coasts of Africa between the middle of the 15th and the end of the 18th centuries.

It is hoped that the journey, which meanders from the Cape Verde Islands to the Cape of Good Hope and then ascends the eastern coast of the continent as far as Ethiopia, will stimulate an understanding of how, at the time of the discoveries, the association of texts and images contributed in constructing an imaginary of Africa and Africans which, even today, pervades the western vision.